Crests and Monstrose Plants Are My Passion By Tony Feicco, Jr., USA 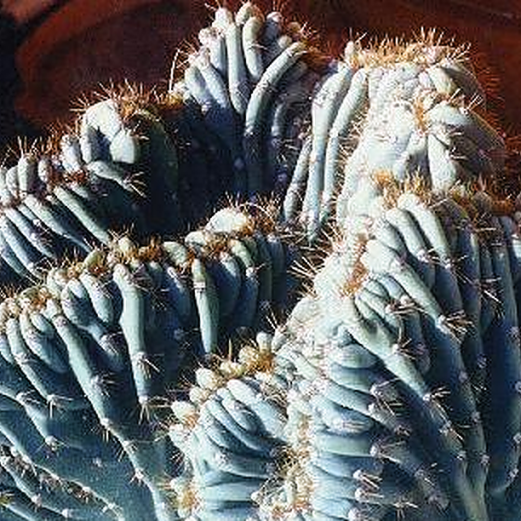 Typical cactus crest of a Cereus species … the owner thinks to be Cereus peruvianus. Crest is over 21 inches wide, 12 inches deep and 15 inches tall.  Plant & Photo: Angel Ramos, Hawaii . (Click on the small photo to see it full size)

I have a big passion for collecting and showing crested plants and I am almost as fond of the monstrose forms. My collection has over 100 crested and monstrose plants of both cacti and the other succulents. The largest specimen I have is a Euphorbia kibwezensis which measures over three feet across and two feet high. My smallest, a few crested heads of a large clustered Blossfeldia. I have some crests that developed out of normal plants and others that have all but reverted back from being crested to almost entirely normal. Some plants, where I have cut the normal growths off a number of times, have finally grown more crested forms.

Many crests should be kept on the dry side, in other words, grown hard. Too much water and/or fertilizer can cause cracks and spreading. Trimming any normal shoots off helps the crested form grow better and truer to form but sometimes these normals can be cut off too soon and will be inclined to crest again after some normal growth. Cuttings from crested cactus should be grafted for best results. Cuttings from crested other succulents can be replanted after the normal waiting period. Keep these very dry for at least a week or preferably two weeks and on the dry side during their normal growing cycle. For euphorbias, this would be in the fall.

Nothing beats the beauty of crested and monstrose plants. They look very outstanding when potted and certainly attract a lot of attention. They usually command much higher prices then normal plants because of their rarity. Of course size and condition also dictate the price on the tag.

Why does this happen?

In the book, The Enigma of the Origin of Monstrosity and Crestation in Succulent Plants by J. J. Verbeek Wolthuys, Mr. Wolthuys explains the reason for cresting saying that the chromosomes are the place where the phenomenon resides and heredity has been established beyond doubt. This was written in 1948. To date no one can say for sure what causes crestation and many authorities are not convinced that it can be passed on through inheritance. Some experts claim cresting is caused by disease, injury, over-nourishment, under-nourishment and poisoning (overdoses of insecticides). Many have tried external influence to effect cresting but no positive results have occurred that can be documented.

Abnormalities not exclusive to cacti

Crests vary in shape. They may be fan shaped, leaf like, undulate, folded, etc. They are more common among cacti than among the other succulents. Many crests can be found in euphorbias. The best example of a Euphorbia crest is E. pugniformis, a South African species. The plant’s long tap root forms a bulbous main stem that spirally produces elongated flowering shoots. The flowering shoots are short lived. They dry up and drop from the base and new shoots form near the main shoot apex. The plant may then become fasciated (crested) in two distinct ways. The apex of the main stem may become crested or the side branches may become fasciated and take on the appearance of leaves. In the first case, fasciation is referred to as ‘stem crests’. In the second, it is referred to as ‘branch crests’.

I cannot stress enough that too much food and water can cause an engorged crest to ‘explode’ and produce an ugly scar. Ed Gay is quoted in The Euphorbia Journals as saying that ..”nothing can cause a revision to normal growth more quickly than over feeding.” Crests do better and look better when grown hard.

Rescued from The Wayback Machine.

Thank you to the Photo Enlarger.